The Critics and the Prioress 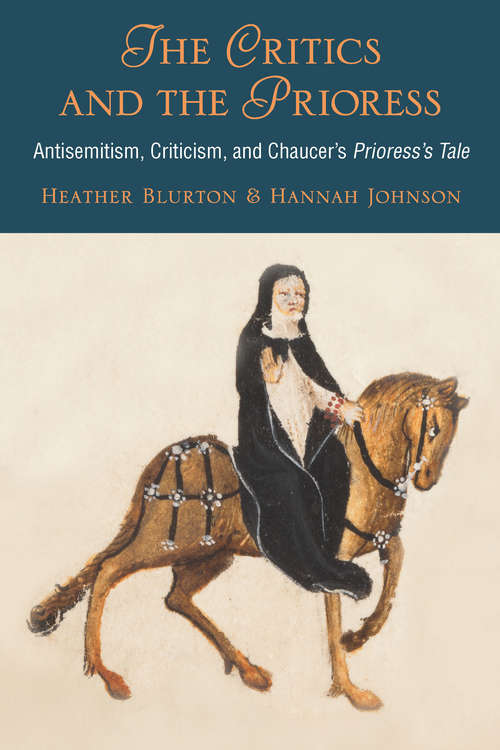 Of all the Canterbury Tales, Geoffrey Chaucer’s Prioress’s Tale, in which a young schoolboy is murdered by Jews for singing a song in praise of the Virgin Mary, poses a problem to contemporary readers because of the anti-semitism of the story it tells. Both the Tale’s anti-semitism and its “Chaucerianism”— its fitness or aptness as part of the Chaucerian canon—are significant topics of reflection for modern readers, who worry about the Tale’s ethical implications as well as Chaucer’s own implications. Over the past fifty years, scholars have asked whether the anti-semitism in the tale is that of the Prioress? Or of Chaucer the pilgrim? Or of Chaucer the author? Or, indeed, whether one ought to discuss anti-semitism in the Prioress’s Tale at all, considering the potential anachronism of expecting medieval texts to conform to contemporary ideologies.

The Critics and the Prioress responds to a critical stalemate between the demands of ethics and the entailments of methodology. The book addresses key moments in criticism of the Prioress’s Tale—particularly those which stage an encounter between historicism and ethics—in order to interrogate these critical impasses while suggesting new modes for future encounters. It is an effort to identify, engage, and reframe some significant—and perennially repeated—arguments staked out in this criticism, such as the roles of gender, aesthetics, source studies, and the appropriate relationship between ethics and historicism.

The Critics and the Prioress will be an essential resource for Chaucer scholars researching as well as teaching the Prioress’s Tale. Scholars and students of Middle English literature and medieval culture more generally will also be interested in this book’s rigorous analysis of contemporary scholarly approaches to expressions of anti-semitism in Chaucer’s England.