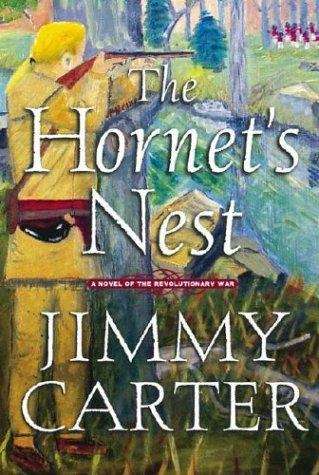 From the Book Jacket:

The first work of fiction by a

President of the United States

a sweeping novel of the American South

and the War of Independence

In his ambitious and deeply rewarding novel, Jimmy Carter brings to life the Revolutionary War as it was fought in the Deep South; it is a saga that will change the way we think about the conflict. He reminds us that much of the fight for independence took place in that region and that it was a struggle of both great and small battles and of terrible brutality, with neighbor turned against neighbor, the Indians' support sought by both sides, and no quarter asked or given. The Hornefs Nest follows a cast of characters and their loved ones on both sides of this violent conflict including some who are based on the author's ancestors.

At the heart of the story is Ethan Pratt, who in 1766 moves with his wife, Epsey, from Philadelphia to North Carolina and then to Georgia in 1771, in the company of Quakers. On their homesteads in Georgia, Ethan and his wife form a friendship with neighbors Kindred Morris and hi ife, Mavis. Through Kindred and b' ng Indian friend Newota, Ethan k >ut

the frontier and the Native American tribes who are being continually pressed farther inland by settlers. As the eight-year war develops, Ethan and Kindred find themselves in life-and-death combat with opposing forces.

With its moving love story, vivid action, and the suspense of a war fought with increasing ferocity and stealth, The Hornets Nest is historical fiction at its best, m the tradition of such major classics as The Last of the Mohicans.

who served as thirty-ninth President of the United States, was born in Plains, Georgia, in 1924. After leaving the White House, he and his wife, Rosalynn, founded the Atlanta-based Carter Center, a nonprofit organization that works to prevent and resolve conflicts, enhance freedom and democracy, and improve health around the world. The author of numerous books, including the bestselling memoir An Hour Before Daylight, Jimmy Carter was awarded the 2002 Nobel Peace Prize.