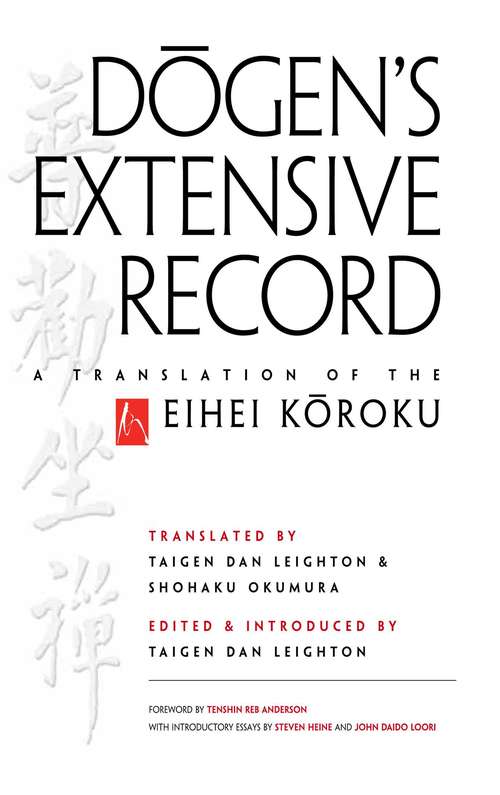 Eihei Dogen, the thirteenth-century Zen master who founded the Japanese Soto School of Zen, is renowned as one of the world's most remarkable religious thinkers. As Shakespeare does with English, Dogen utterly transforms the language of Zen, using it in novel and extraordinarily beautiful ways to point to everything important in the religious life. He is known for two major works. The first work, the massive Shobogenzo (Treasury of the True Dharma Eye), represents his early teachings and exists in myriad English translations; the second work, the Eihei Koroku, is a collection of all his later teachings, including short formal discourses to the monks training at his temple, longer informal talks, and koans with his commentaries, as well as short appreciatory verses on various topics. The Shobogenzo has received enormous attention in Western Zen and Western Zen literature, and with the publication of this watershed volume, the Eihei Koroku will surely rise to commensurate stature. Dogen's Extensive Record is the first-ever complete and scholarly translation of this monumental work into English and this edition is the first time it has been available in paperback. This edition contains extensive and detailed research and annotation by scholars, translators and Zen teachers Taigen Dan Leighton and Shohaku Okumura, as well as forewords by the eighteenth-century poet-monk Ryokan and Tenshin Reb Anderson, former abbot of the San Francisco Zen Center - plus introductory essays from Dogen scholar Steven Heine, and the prominent, late American Zen master John Daido Loori.