Senryu Poems of the People 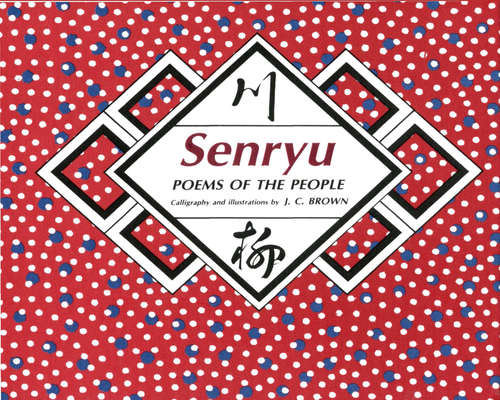 Senryu is a form of Japanese poetry named after a man who wrote no senryu. Karai Hachiemon (1718-1790) was a government official in the Asakusa district of Edo (now Tokyo), a post he inherited from his father. Under the pen name Senryu, meaning River Willow, he was also a noted poet, and acted as judge at contests of maekuzuke, or "verse capping." In this traditional form of literary amusement,a given short verse of fourteen syllables was capped by a longer verse of seventeen syllables to produce a thirty-one-syllable poem in the traditional tanka form (the longer verse could also be capped by the shorter). The capping portions, known as tsukeku, eventually came to be read and appreciated by themselves. In 1765 Karai Senryu published a selection of tsukeku that reflected his personaltaste and humor. This anthology, Yanagidaru, became widely popular and was followed by 22 more of the same title, also compiledby Senryu, and a further 144 volumes compiled by his successorsto the tradition.The type of poems Karai chose eventually came to be known assenryu. They did not require inclusion of a seasonal word, as didhaiku, which developed from the introductory portion of linkedverse. Although senryu were at first written in only seventeen syllables(in lines of five, seven, and five syllables) or fourteen syllables(in lines of seven and seven), these rules became less strictly adheredto as time passed. The main difference between senryu and haiku is one of tone.The meaning and structure of a haiku can be brilliant, but I personallyoften find them conventionally serious and sentimental, offering few surprises. One has to be a near genius to write good haiku, but almost anyone can write reasonably good senryu; the form seems somehow to have escaped the structural restrictions that bind and, perhaps, limit haiku. Whereas haiku often call foranalysis, I have found that a typical response to senryu is a laugh or a chuckle followed by a remark like "That's so true!" To me, that is the appeal of senryu: They express everyday truths, happy or sad, in succinct verse. Although the poems I have selected for this book date from the eighteenth to the early twentieth century, senryu are still being written today. Newspapers run regular columns featuring senryu submitted by their readers, and many other people, imagining they are writing haiku, are really composing senryu. A chance encounter with an old acquaintance, a drunken night on the town, a lovers'spat-everyday happenings like these have been and continue to be inspirations for senryu. I hope that this small book will make you smile, reflect upon life, and come to the realization that poetry can be found in anything.